For more information on our ongoing response to COVID-19 in Gainesville, Jacksonville and Central Florida, visit our coronavirus website. END_OF_DOCUMENT_TOKEN_TO_BE_REPLACED

Something to sing about 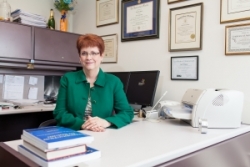 Pete Hennings didn’t know if he would ever be able to speak again. The outlook isn’t the brightest for someone whose esophagus has been removed due to esophageal cancer. But with the help of the College of Medicine department of emergency medicine and his speech pathologist, Judith Wingate, Ph.D., Hennings was able to sing again.

“I was happy to be alive. They caught it in an early stage,” Hennings said of the cancer that left him without an esophagus and with vocal cord paralysis.

Hennings, a music editor by day, plays in a bluegrass band called 2 PM with two friends.

“After the surgery I could barely squeak out a note. I hated the idea that I couldn’t sing anymore,” Hennings said.

That’s when he was referred to Wingate. A speech pathologist for more than 30 years with a background in music therapy, Wingate has been specializing in voice disorders for the past 15 years.

“Pete is a big success story for us,” said Wingate, a clinical associate professor in the department of speech, language and hearing sciences in the College of Public Health and Health Professions. Hennings’ achieved this success through monthly therapy sessions with Wingate, which included breathing exercises, vocal exercises and general care advice on things to avoid and things to enhance in his day-to-day life.

He’s not the first vocalist Wingate has helped. In fact, you could almost say helping singers is sort of her speciality. In 2008, she published and authored the book “Healthy Singing.”

Written to be a vocal health book for singers, Wingate said she wanted to dispel some of the myths about what’s healthy and what’s not when it comes to a person’s voice and to provide necessary information from a physiology standpoint.

The book also includes exercises to maintain a healthy voice and information on how to find and access a good vocal care team.

“It’s not a scientific book but if you’ve got a singer who is struggling, here is a resource that might be helpful to them,” Wingate said.

Wingate, an accomplished singer herself, has been singing since she was in middle school and has performed with Florida Gateway College at Carnegie Hall three times. She joined the UF faculty after earning her doctorate in 2004.

“I love seeing the students understand how these issues of speech and language impact peoples’ lives and the ability we have to intervene and make a real difference,” Wingate said.

Within a year of having his esophagus removed and less than six months after having his vocal cords operated on, Hennings was onstage singing with his band again.

“For me, Dr. Wingate was a godsend. She was the perfect person because she understood where I am coming from,” Hennings said.

As a singer, teacher and speech pathologist, Wingate is busy, but she has no plans of stepping away from any of her roles anytime soon. Especially not when she can use all her skills to help patients like Hennings.

“The field has changed so much that I have never been bored. I have never regretted going into this profession,” she said.